Julie Godefroy - Reporting from the Biennale

This year’s Venice architecture Biennale offered some inspiration to imagine resilient cities, focusing on projects which “report from the front” and tackle the key issues of inequalities, pollution, limited resources and waste.

As a sustainability consultant in London, I became interested in the 2016 Architecture Biennale when they announced it would be curated by Alejandro Aravena, the Chilean architect behind the “half-a-good-house”. The idea opens home ownership to people on low income, starting with simple shells which are finished and tailored over the years as budgets allow1.
"What does the lady on the ladder see?"
The Biennale poster is archaeologist Maria Reiche on a ladder, scanning rocky ground. In the 1940s she walked the Peruvian desert to study the Nazca lines, carrying an aluminium ladder. From the viewpoint at the top, the lines turned from random assemblies to reveal themselves. For Aravena “the idea is to listen to those who have been able to acquire a new perspective so that those of us on the ground can share the lessons they have learnt.”
The Biennale displays over 150 practices and national pavilions, from architectural concepts through to small individual buildings and country-scale initiatives, via “temporary” settlements such as refugee camps and religious festivals attracting millions of pilgrims to a single spot for a few weeks.
So these are my very biased and reductive highlights.

Reporting from the front

Aravena has stated that the Biennale selection was driven by talent and creativity rather than an ethical approach, and that architects have no particular duty to “do good”, though they may do so to test their skills in challenging environments2. I certainly found it infused with social and environmental responsibility as well as cautious practical optimism.
The exhibition did not revolve around a handful of starchitects but instead a variety of firms from around the world. Some projects straddled over arts and architecture. Others were practical responses to natural or political crises where architecture acted as catalyst for change, such as “replacing guns with tools” in Sri Lanka by training soldiers to rebuild schools, making use of their organisational skills while facilitating their conversion to civilian life3.
The projects often heavily involved local communities and in large majority were very much anchored in reality and action rather than theoretical exercises (British pavilion probably excepted, as despite ostensibly addressing housing it felt somewhat detached from current issues in the UK market).
Many projects were less concerned about the buildings than about the spaces in between and their use for public life and environmental services – parks, squares, playgrounds, markets ... This often involved small incremental interventions over long periods and collaboration between disciplines and public and private actors rather than traditional fractioned approaches. For example a project in Medellin, Columbia, started when the mayor and utilities company noticed that high violence typically occurred in the areas least illuminated at night, which also happened to be the locations of the city’s water tanks. An improvement programme was carried out by successive administrations, regardless of political factions, turning the tanks and their surroundings into lively parks and public spaces4.

I was also impressed by the creative and efficient use of resources, starting with the stunning Arsenale introduction room made out of last year’s exhibition materials – that’s 100 tons, or 10,000m² of plasterboard and 14km of metals studs… Cue to Ecobuild 2017! https://twitter.com/JulieG_Sust/status/793101508711686144. 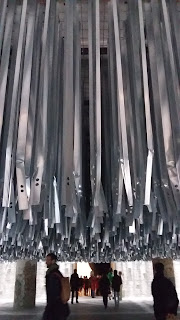 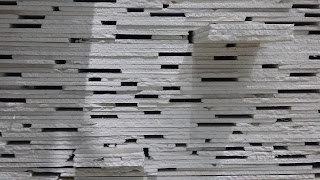 This theme ran through numerous exhibits, from structural design challenging assumptions to bring significant savings, including the work of Werner Sobek on vacuum, negative pressure and “air beams”, through to up-cycled and re-used materials.

This was inspirational given that in the UK, construction generates half of the country’s total waste6. It is also very much a land planning issue for future cities: in 2010 it was estimated that unless we drastically changed our use of resources, England would run out of landfill space by 20187… To end positively, the Biennale also provided a great example on this topic: the restoration of a landfill site near Barcelona into a park and farming landscape8.
References: 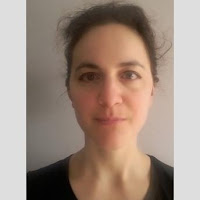 She is a member of the National Trust Historic Environment Group and its Design Advice Forum, and a member of the advisory group for UCL IEDE's new MSc in Health, Wellbeing and Sustainable Buildings.

http://www.juliegodefroysustainability.co.uk/
Posted by Unknown at 12:18